True wisdom comes to each of us when we realize how little we understand about life, ourselves, and the world around us.

(Not) a <strong><em>selection</em></strong> of my interviews

I am happy to present to you six exclusive interviews, that I have conducted with renowned scientists (and one brilliant author). Nevertheless, these six are just representatives for all those interviews that I have not mentioned here. None of my interviews was less interesting or inspiring. All interview-partners were great! The same goes for all those, whose statements I have only used as direct quotes or citations.

with scientists, spokespersons, colleagues and astronauts lead to interviews. But the many business cards constantly remind me, that I have oftentimes met committed and interesting human beings, and for this, I am very thankful. I hope that this will continue to be so in the future. 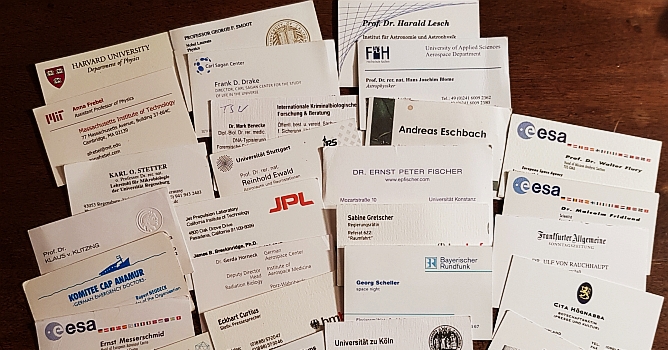 In October 2006, after hearing that the Nobel Prize in Physics would be awarded to George F. Smoot, I quickly flew to San Francisco, to be the first foreign science writer interviewing him. I may have even been the first to receive his new business card with the addition “Nobel Laureate Physics“, which he handed over to me proudly, saying: “You are the first to receive my new business card!“ Said interview was printed numerous times. It can be read in full length in the highly successful Telepolis Special „Jenseits von Zeit und Raum” (‘Beyond Time and Space’).

This was a long, beautiful and substantial interview, in which we discussed many topics, especially his latest book „Lord of All Things“ (translated into English in 2014). Shortly after, we had dinner, together with his wife. At that time I still addressed him formally, after the interview we were on first name terms. A brilliant and quick-minded person, full of ideas and following technological and scientific developments with an eagle eye.

We are not only made of stardust!

We deserve the right to get smarter!

Space itself is an actor in a great drama!

Almost all stars have earth-like planets!

Further interviews (mostly in German) with renowned experts and scientists can be found on my interview pages at  Interview-Seite at  Astronomie.de und bei  Telepolis (Heise-Verlag).